Those who knew me back in the day (I say that like i’m 50+) in the late 90’s/early 2000’s know that I had a bit of an addiction to Surge soda.  Once the soda was discontinued in cans/bottles in 2002, I could typically be found in ChuckECheese since that was the last place I could find the stuff.  A little over 10 years ago, I had my last Surge soda. If I knew this, I likely would have enjoyed it a bit more. Goodbyes are a sad thing, thankfully it wasn’t TOO bad because Coke released Vault a few year later.  Vault was almost Surge, but it clearly wasn’t the same and was discontinued in 2011. It softened the blow but was a sad attempt by Coke.  Did I boycott Vault? Heck no! I had vault at my high school graduation party by request, to the point where I made my brother and little cousin pose with it. I was even on the popular Vault fan site, vaultkicks.org (RIP) posing with the awesome Vault truck.  It just wasn’t Surge. 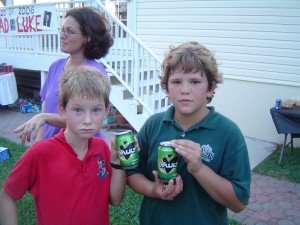 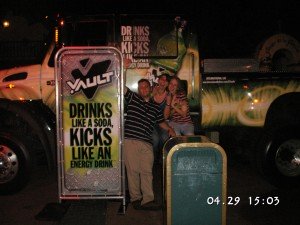 Going through my email, I found a chat log with my old pal Eric OC (he’s a mountain dew guy… boo!). We we’re chatting about a recent doctor visit I had 😛

When I met my wife and we were discussing wedding plans I had brought up the idea that we would toast with Surge purchased from ebay. Because my wife is awesome, she was on board.The only issue was there was only one can available and was going for $90.  Sadly, we didn’t toast Surge at the wedding. 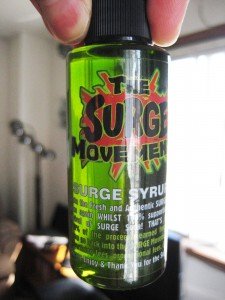 This week, I was notified by crew member, Mike B, that Surge syrup could be purchased on ebay for a reasonable price. Turns out the fine folks who are more addicted than myself over at http://facebook.com/surgemovement got their hands on a couple boxes of the stuff and were selling 2 oz bottles. Thankfully, they weren’t in it for the money and were selling it for a reasonable $17 shipped. 2 ounces of syrup that expired back in 2003 is enough to make 12 ounces of Surge goodness. It shipped today. You better believe there will be video of this. I can’t wait.