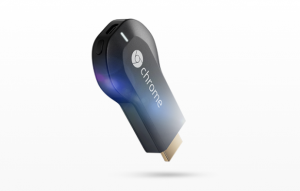 Today Google introduced Chromecast as well as some other awesome things.  Chromecast is going to change the way we use our TVs. Currently, Chromecast can only do a tad more than your average smart tv (for now). It does YouTube, Netflix, Google Play, chrome browser tabs (in beta) and other apps such as Pandora are on the way.  However, if you don’t have a smart tv, this thing is where it’s at. Oh, and did I mention it’s only $35? It gets better. If you buy it before the end of the year, you also get 3 months of free Netflix!!! That’s $24 of it already! It even works for existing accounts! So go get your free 1 month trial, then add your 3 months free, $32 value!

So, I obviously rambled a bit. What can I say, I’m excited. Chromecast is a tiny usb drive sized ChromeOS device that has 2 ports, micro usb and HDMI. It plugs directly into one of your TV’s spare HDMI ports and possibly even into your TV’s usb port for power. Once it’s connected to the tv, you feed it your wifi info and possibly your tv model. From that point on, when you want to watch a youtube video, you load it on your phone and push a button to send it the link. It can turn the TV on and even direct it to the proper HDMI source. I’m assuming it uses HDMI CEC for this, however I could be wrong.

So we know that the Chromecast device allows android (and ios) apps to push content to the tv. However, the true magic comes with how it handles the task, simply because it does it a bit differently. Since the chromecast runs a version of ChromeOS it has the capability to load the url that was sent from the app and play the content directly from the cloud instead of the device. This allows you to completely multitask while content is playing. Your phone/tablet then acts as the remote for the chromecast. The beauty of this is you can have as many remotes as you want and a chromecast on every TV.

The fun part begins when the developers get their hands on this device. Since it’s so cheap, I see this thing taking off very quickly, especially since the Netflix bonus makes it a no brainer.

Now for the next episode, chromecastblog.com coming soon!

Chad.local @outkastz
outkastz RT @TriglassPro: BTS @buccaneers // The Arctic Crossing. Made for the 2022 Tampa Bay Buccaneers Show Open. Take a quick peek into the 3D sc…
2h
outkastz This is how it's done. https://t.co/QAchMQyl30
23h
outkastz The current state of FSD. https://t.co/Dc2ysiNXZK
Nov 26
outkastz RT @brianwhelton: Our latest product release successfully installed, this earthquake proof network will sway in rhythm with any shocks and…
Nov 26
outkastz There is no escape. Friends operating cameras and controls. #GoBolts https://t.co/4MlcHUJaLK
Nov 26