Ever send out a text and never hear back, just to find out they never got it? Or worse, they lie about never getting it? Gone are those days!

For those who haven’t started using Google Hangouts, I suggest you do! Google Hangouts is a merge between their old Google Talk app, Google+, and Babel.  Hangouts not only shows you if the message went through, but it also shows you if they read the message, a feature BBM users have loved for ages. Now integrate that with Google+, you can share literally everything with anyone. Voice chat, video chat, screen sharing, group chat, group video chat, etc. Images show up inline with the conversation and don’t require a messy download operation like MMS which requires cell data. Hangouts can work with cell data or wifi. You can use it on your laptop, your PC, your tablet, your android phone, the redheaded stepchild’s iphone (I was going to go with your grandma’s iphone but decided against it) and literally anything with a browser. It’s literally instant, no sms lag time necessary! 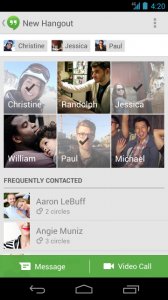 But what about your contacts? Chances are they’re all there without any setup. In this day and age, who doesn’t have an Android phone or at the least, a Google account? They all have hangouts, even if they don’t know it. Nothing like forcing a little pop up in their browser. It’ll even show you when they are online. I could rant for days, but I think you get the idea.